Delta 8 Tetrahydrocannabinol, or as it is more commonly referred to, Delta-8 THC. Delta 8 THC is a naturally occurring compound within the cannabis plant, and is present in CBD rich hemp as well. People have been asking: Is Delta 8 legal in my state?

Under the 2018 Farm Bill, signed into law by former President Trump on December 20, 2018, hemp was removed from the Controlled Substances act, and is no longer a controlled substance. The Farm Bill states that any cannabis plant, or any derivative thereof, so long as it contains not more than 0.3- percent Delta 9 THC.

Delta 8 THC is a compound within cannabis, and hemp, and when derived from CBD, it falls under the legality that is stated within the Farm Bill. So the question becomes, what’s all the fuss about?

Why is Delta 8 Legal?

Delta 8 is legal due to the language stated in the Farm Bill. Plain and simple.

When derived from CBD, it falls under the very firm limit of .3% Delta-9 THC. It is also completely organic within the plant.

The DEA has a serious problem with Delta 8, but their argument against it is not backed by science, or even coherent thought. The DEA, while it is an organization designed to prevent drug crime, when in reality they cause mass hysteria around drugs, and continue the dreaded War on Drugs worldwide.

The DEA has recently placed Delta 8 THC in their “orange book”, meaning that according to the DEA it is a Schedule I Controlled Substance.This doesn’t make a ton of sense considering that it is organically derived, and with compliant lab reports, legally, there should be no problem.

The problem with the DEA is that they block science, they block progress, and inhibit people from obtaining a substance that can actually change lives.

Even in my own personal life, as one who deals with anxiety, having something that can offer a “high” without the paranoia that Delta 9 gives me, is perfect. I know for a fact that I am not the only person who feels this way.

Delta 8 has grown immensely in popularity, and part of that is due to its emergence within popular culture, especially during the pandemic. As of 2020, the Cannabis market had expanded 17.5%, making $17.5 billion in they year 2020 alone.

So it is puzzling that considering the growing national debt, and eventually having to pay off the debts of the COVID-19 pandemic, why the DEA would want to limit the cannabis, and hemp industry that is clearly growing exponentially, and keep the country in debt.

I mean, it only makes sense, they are an organization that thrives off of the hard working American people. In the year 2020, the DEA received $3.1 billion in American taxpayers dollars. This is an organization that is designed to keep good people down, and continue the massive cycle of mass incarceration that began in the era of Jim Crow.

More than 20,000 people were arrested on drug related offenses in the year 2019 alone. 75% of those were non-white people.

Now, if we really think about this, one of two things makes sense. Either there are no white drug dealers (which is a complete lie), or, there is a systemic targeting of these non-white people in their own neighborhoods. Logic, and past history points to the latter. Many of those that are looking to legalize cannabis federally would be hard pressed to ignore the racist history of marijuana prohibition, the term “marijuana” even comes out of racism.

The DEA is an organization, corrupt or not, that was designed to uphold the laws passed by the Senate, and enforce said laws. The DEA is not the government however, and with its ruling on Delta 8, it shows its gross misuse of power, as it has through its entire history.

Want to read up on the DEA, and the absurd amount of injustices they have committed? Read more about that here.

Is Delta 8 Legal in my State? 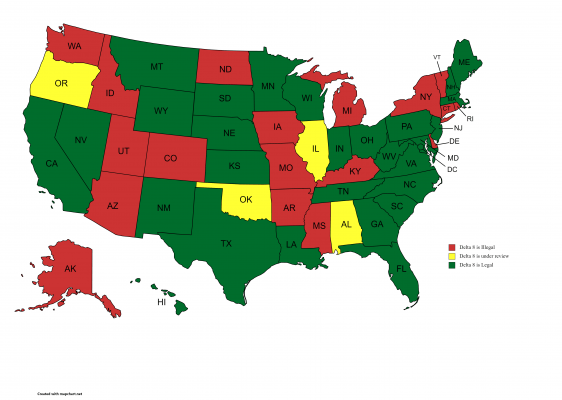 Above is an updated map of Delta 8’s legality nationwide. This blog will be updated frequently in order to ensure that the latest information is readily available. Most recently, Michigan moved to ban Delta 8 joining the other states prohibiting the sale or manufacturing of said products.

What Delta 8 THC has done, more than anything, has opened up a discussion, and a platform for the hemp industry once again. Not since the CBD boom of the early 2010’s have hemp derived CBD products had this much pull in the industry.

What needs to come to the forefront however, is the clear differences between hemp and marijuana. While they both come from the cannabis sativa plant, their difference in chemical compounds should make them quite obviously different.

The marijuana plant is a complex one, filled with hundreds of cannabinoids, which all have completely separate effects on the human body, not all of which are psychoactive effects however.

There is actual clear, verifiable evidence that marijuana and hemp can have positive medical benefits. None of which exist in the tobacco industry, or the alcohol industry, yet those industries get a free pass from the government due to the money they bring in. I truly believe the cannabis industry could in time out do both of these industries, as little as the government wishes to admit it.

For example, CBD oil is typically used for pain, or to take the edge off in the morning, but produce no psychoactive effects. Replace CBD with Delta 9, and it is a completely different experience than that of CBD.

What Delta 8 does need more than anything else, is regulation. There are plenty of companies, unlike Ghost Vapors, that do not contain any COA’s or lab reports at all. Meaning that there are unregulated, unlicensed, and worst of all, untested products on the market.

Delta 8 is illegal in a number of states for this reason alone. The fact that unclean products are circulating with a cannabinoid that has shown a tremendous amount of potential is a shame. Maybe, with regulation, Delta 8 will be making a comeback in these illegal states soon.